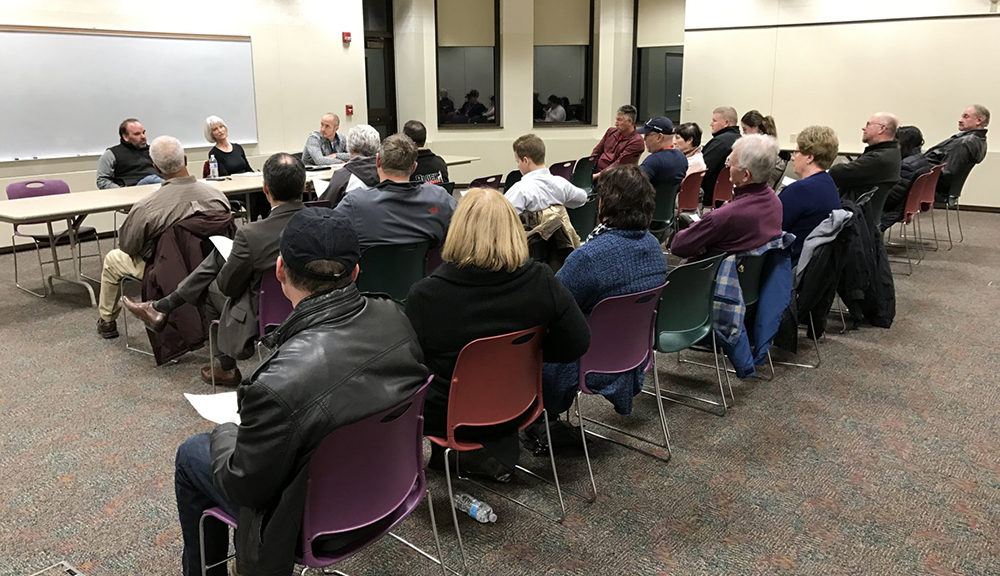 The Tree Tops Annual HOA Meeting took place at the Germantown Community Library on March 2, 2017. Here are the minutes from that meeting.

Call to order at 7PM, with about 25 people in attendance. The board was introduced​ as​ Denise White, Ben Jonas,​ and​ Dan Roeming.

Pete Holcomb from CLS was present, to take questions and address concerns.​ Pete answered​ ​a​ couple of ​mowing and landscaping questions.​​​

Denise gave the landscaping report. CLS will be the TT landscape/lawn mowing contractor again in 2017, as they are doing a good job, and the rates have not increased. The service season will be April through November.

Buckthorn removal in the woods along the Eastern border of the park, (behind houses on Emerald Ln., between Elmwood and Sun Valley.) The buckthorn was ​removed​ and sprayed. This was done at the request of the homeowners living next to the park, on Emerald Lane.

The parking lot and the two paths in the park were sealed/resurfaced.

Dead trees were removed in the woods behind the ​pond​ bordered by Elmwood, Sun Valley, and Twin Meadows. Many huge dead elm and ash trees were in danger of falling and were removed.

Windfall trees, the result of two big windstorms, were also removed, in the woods near Sun Valley and Twin Meadows. One huge, hollow tree that was in danger of falling on the house on lot 81 was also removed.

Mulch was freshened up at the entrances, and some trees that needed it were mulched, throughout the subdivision.

Brush and tree removal around the two big ponds, so the fountains can be seen.

One basketball post in the park is broken, and will be replaced with an adjustable one.

Mulc​h replacement​ ​w​as done throughout TT in 2015. Now, some areas are fine and don’t need more​ mulch​, and some areas do. So, this year, we will replenish the mulch only where it is needed.

Buckthorn removal: We will continue with buckthorn removal in the TT ​common​/wooded areas. The Ozaukee/Washington County Land Trust has grant money available for buckthorn control, and TT is applying for invasive control assistance funding from them.

The 2017 buckthorn removal project is planned for the wooded/open area behind lots 24-25, bordered by Elmwood, Sun Valley, and Twin Meadows. This has been on the to-do list for years and has been requested by the adjacent homeowners.

Dan gave the financial report. All items on the 2017 budget were​ reviewed​, and all questions and concerns were addressed, including setting the 2017 dues at $300,​ the​ same​ amount​ as last year.

Motions were made and seconded to vote to approve the 2017 budget and $300 dues. Both were passed unanimously, by a show of hands vote.

Ben gave the mailbox report. Some mailboxes have been damaged, due to vehicles and vandalism. Information on replacement is here on the Tree Top website. It was brought to our attention that the installer listed online is not providing that service anymore, so his name will be taken off. There was some frustration expressed about the cost of replacing mailboxes, and our options, under the deed of restrictions, were discussed. The conclusion was to continue with our current course of action.

New board member ​volunteers​ were asked for, and none came forward. Therefore, motio​ns​​ w​ere​ made, seconded, and voted on to keep the board as-is for another year. After the vote, Mike Berkowitz ​volunteered to be​ on the board next year.​ Everyone gave a round of applause to the current board for their volunteer service to the neighborhood.​

The floor was opened to other/new business. There are some dead birch trees in the outlot behind lot 145 that need to be removed. This​ was added to the 2017 landscaping repairs schedule.​

​Doug Bowman mentioned that the East entrance sign ​has rust that needs to be removed. This was put on the 2017 repairs schedule.

Pat Tasker said the lot on the corner of Highway Q and Pilgrim Rd. has been sold, and suggested Tree Tops residents find out what kind of development is planned on for that area.

A resident on Tree Tops Court asked about buckthorn removal both on their property and next to it. He also expressed concern about security in Tree Tops, and asked about a neighborhood watch program. The board said it is not part of ​their​ ​responsibility​ to ​administer​ such a program. It would be up to people in Tree Tops to organize and run it, and no one in ​attendance​ was willing to do so.