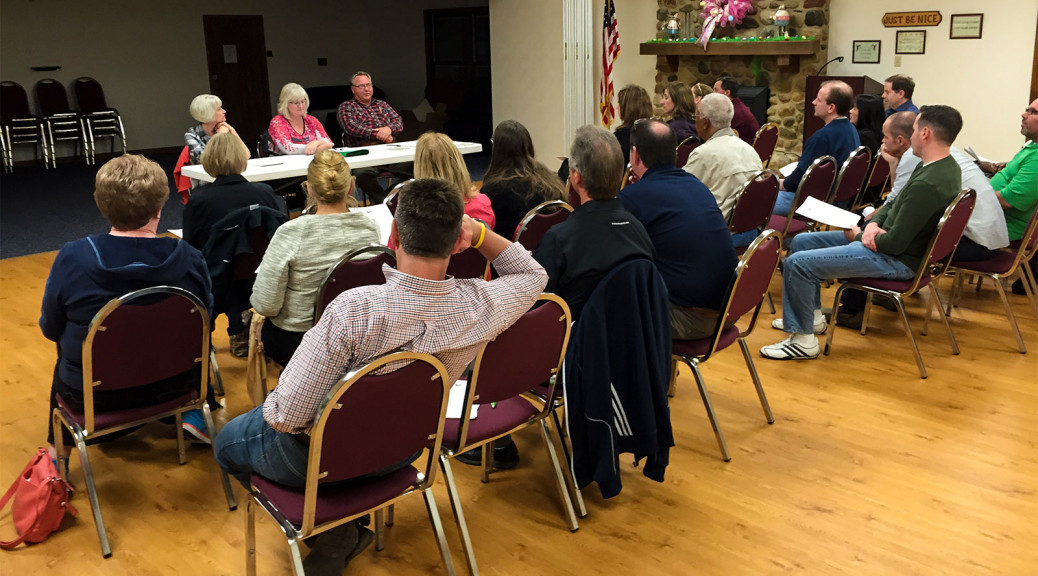 These notes are from the annual meeting of the Tree Tops Homeowners Association, held at the Germantown Senior Center on April 14, 2015. Here are the minutes from last year’s meeting, and downloadable documents of meeting minutes and final budgets from this and past meetings — as well as other related legal documents — are available in our archives.

1. Call to order
Meeting was called to order at 7:00 PM with approximately 25 people in attendance.

2. Introductions
The current committee was introduced as Denise White, Del Abel, and outgoing committee member Laura Hensel, whose term is expiring after the meeting.

3. Election of new committee member
Ben Jonas was nominated to serve on the committee for the next three-year term. Motion made, seconded and carried.

4 2015 Budget and 2014 Actual Expense review
Actual income and expense items were reviewed in detail by Del Abel. Several items were given special mention, such as treatment of trees for emerald ash borer and past year fees, and attorney’s fee reimbursements. Motion made, seconded and approved to accept budget as given.

6. Landscape planting & review
We discussed whether additional plants are needed for the East entrance, and we decided to plant more tulips. Also 4 more trees are needed around the swing set in the park. A tree fell behind lot 25 and will be cleaned up, and another resident asked that white birch trees behind his lot 145 be cleaned up too.

7. Buckthorn removal plan
A map showing the area where buckthorn will be removed this year was presented. A motion was made, seconded and approved to notify residents in the immediate area before the work is started. The group in attendance asked for a 5-year-planning subcommittee to form and look into large projects such as the buckthorn removal, replacing trees, addressing park issues and the pie-shaped outlot development, and then return to the next annual meeting with costs for completion of these items.

8. Review Dues Collection efforts
A summary sheet was distributed by Del Abel showing that 181 of the 182 lots paid the $325 dues. Eleven paid the late fee and significant progress was made collecting previous years’ fees, stipulation payments and attorney’s fees through foreclosure actions. We should receive about $5,000 more in stipulation payments this year. One property has filed bankruptcy, so collection of those fees will be delayed and uncertain.

9. Declaration of Restrictions review
A reminder sheet was distributed and will have the additional mention of painting of mailbox added before sending out with dues notice this year.

10. Outlot usage
Residents are not to place their grass clippings on the outlots. The large lumps of grass are unsightly and make maintenance work in the outlot more difficult.

11. Lamp posts and mailbox issues
Laura Hensel reported that her quarterly lamp post review found many lamps not lighted as required but most people do replace the bulbs or fix the unit wiring after being notified the first time. Some mailboxes need attention and those homeowners were sent letters asking if they want to purchase a new one or fix the current cedar wood assembly.

12. Park report
Denise White gave the general park report. Basketball court usage, and after-dark park activities continue to be ongoing problems. Police intervention has helped in both areas, and residents near the park will continue to call the police as needed, to keep activities under control. Parents were urged to tell their children that the park is closed after dusk and police will be consistently called to break up after-hours park activity. The basketball hoops have been set at 10 feet. However over the winter someone changed the hoops to 8 ½ feet. A motion was made seconded and carried to remove the locks and set them at 10 feet and reset them at 10 feet periodically if they are changed.

13. Other business
A concern over the ice skating on the pond was expressed by some residents A motion was made, seconded and carried to make new signs around the ponds that can be changed to include no ice skating. Perhaps a sign that flips over for the winter can be acquired.