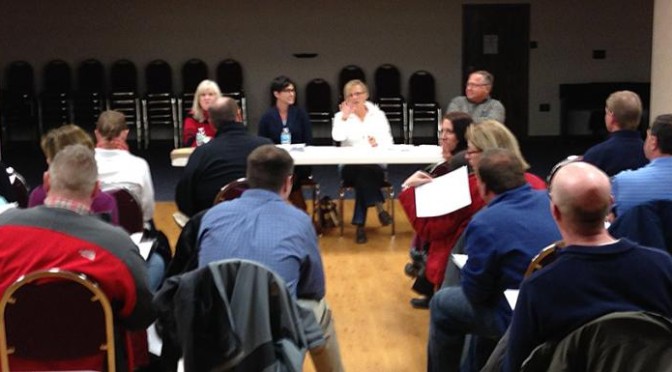 These notes are from the annual meeting of the Tree Tops Homeowners Association, held at the Germantown Public Library on April 7, 2014. Here are the minutes from last year’s meeting, and downloadable documents of meeting minutes and final budgets from this and past meetings — as well as other related legal documents — are available in our archives.

1. Call to order
Meeting was called to order at 7:00 PM with approximately 30 people in attendance.

2. Introductions
The current committee was introduced as Denise White, Mary Abel and Laura Hensel. During the introductions it was stated that Del Abel continued to assist the committee with record keeping and various projects.

4. 2014 operating budget and 2013 actual expense review
Actual income and expense items were reviewed in detail by Del Abel. Several items were given special mention, such as an insurance claim of $10,925 for the destruction of the west entrance monument and the additional collection of past year fees, garnishments and attorneys fee reimbursements. An expense item for $21,015 to repair the river runs from the street to the holding water ponds was discussed. Motion made, seconded and approved to accept budget as given.

6. Review dues collection efforts
A summary sheet was distributed showing the amount of money spent so far and the amount of money the attorney and TTHA received from each so far. It was stated that on Property #3 we will not get the remainder of the $5,537.98 due us because of foreclosure by the bank. Property #1 is completely paid off and property #2 is consistently paying now and should be complete in 5 months. Property #4 has only $500 left to pay down from the almost $8,000 due from dues, late fees, interest and attorneys fees. A question on pursuing the collection of dues and late fees from one more property was presented to those in attendance and it was generally agreed that the committee should legally pursue the dues owed by this homeowner as well.

7. Basketball court
Several residents raised questions about what can be done with the court. Noise and drug deals from young adults, many of whom are not residents of Tree Tops are annoying the neighbors. Ideas to tear down the basket hoops and poles were discussed. Closing the driveways and removing the blacktop were also advanced. A motion to set up a special committee to analyze and recommend a solution was agreed upon. A sign up sheet for this committee was given and Laura Hensel will coordinate these meetings and report back at the next meeting with suggestions of what can be done.

8. Outlot usage
Residents are not to place their grass clippings on the outlots. The large lumps of grass are unsightly and make maintenance work in the outlot more difficult. A motion was made, seconded and approved to spend more money on fertilizing and weed killing in the outlots. A resident asked the committee to stay the course on the buckthorn removal and it was stated that $3,000 remains in the budget for such a project. Another resident asked the committee to look into filling the holes with dirt around the basketball court where settling has occurred. Some nails need to be hammered down on the sand box in the park as well.

9. Lampposts and mailbox issues
Pursuant to an agreement between the Village of Germantown and the subdivision developer spelled out in the Deed of Restrictions, lamp posts are required to be lit from dusk to dawn.

10. Mowing & landscaping contract
Complete Lawn Service was selected to do the mowing and landscaping for 2014 again. It is their 2nd year and we expect a better overall service outcome.